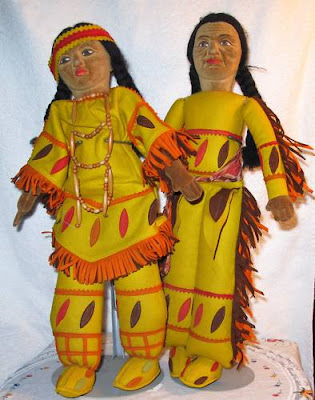 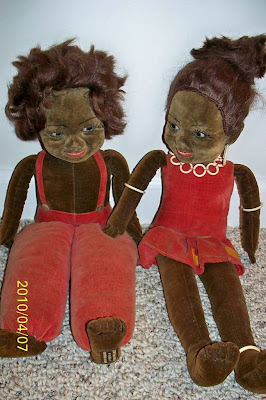 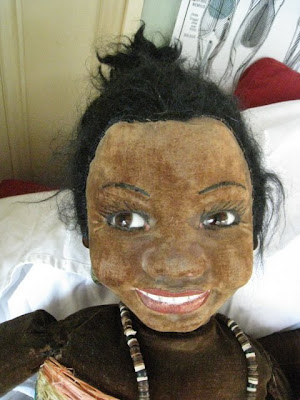 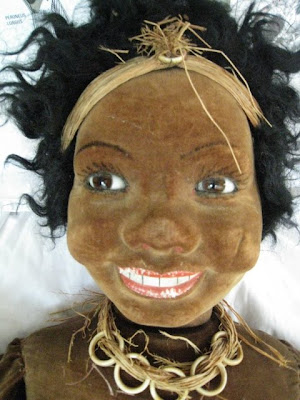 The top picture shows a rare pair of Norah Wellings Native American Indians. They are hard to find in the larger sizes and these are both 16 inches tall in lovely condition. Wonderful realistic faces and bright felt costumes. They have painted eyes and I have never seen any with glass eyes. The male is model K23 called 'Hawk Eye'. The female squaw in this photo is rare to find and she is not shown in any of the catalogues I have. an early British Industry Fair photo in the 1930's shows both models on display and believe this was their debut. Norah Wellings made a few different Native American Indian models including a squaw in a different costume and I will write more about them at a later date.

The two black dolls in the next picture are both the earlier glass eyed Norah Wellings. They were made from 1927 to mid 1930's with glass eyes and the later ones had painted eyes. The female is called 'DuDu' model 119 and she is also found with a short curly wig as well as her longer hair pulled on top in a bun. The male is 'ZuZu' model 109. He was made with painted eyes right up until the catalogue in the last Norah Wellings 1959. Both dolls were made in various sizes from 9 inches to 36 inches.

Next we have a fabulous large 36 inch Norah Wellings Girl once again called 'DuDu' but this is model 122 with glass eyes, she was made from 1927. She does not appear in the Norah Wellings catalogues after 1940. Later dolls are seen with painted eyes. She waers a raffia skirt,raffia bra style top and beads around her arms and ankles. She came with variations to her raffia clothing and also sometimes with a short curly wig. Made in sizes 9 1/2 inches to 37 inches.

Another wonderful large Black doll called 'ZuZu', model 121 he is 36 inches tall with glass eyes, produced from 1927 until around 1940. Later dolls had painted eyes. he wears a raffia skirt with raffia tied around his legs, leg bracelets with raffia threaded just like the necklace he wears. Once again he can be found with variations to his raffia costume and in a range of sizes from 12 inches to 37 inches.

Thank you once again Leeanne for sharing your photo's with us.
If anyone would like to share photo's please email me at norahwellingsjournal@gmail.com 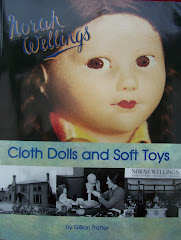 Contacting Me and Comments

My book ' Norah Wellings Cloth Dolls and Soft Toys' is now out of print but can sometimes be found on ebay or Amazon.

I have written articles for The Doll Advertiser an excellent magazine by Judy Bebber and printed twice a year in the United Kingdom. Judy Bebber also organizes Doll Fairs. To order Magazines and for Information on the Fairs please go to her website www.dolladvertiser.com

I am happy to answer any questions you may have regarding Norah Wellings Items or if you would like to share any Norah Wellings products you have please email me. Emails and photographs can be sent to this address
norahwellingsjournal@gmail.com

I look forward to hearing from you

All photographs and articles presented on this site are copyrighted by those offering the images or articles for posting and are not to be used by other persons without permission. All writings and photographs are copyright Gillian Trotter unless specified. 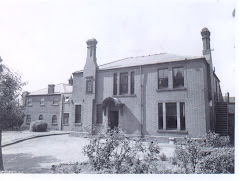 Norah Wellings was a very talented artist and designer of cloth dolls, she started her career with Chad Valley in 1919 and became one of their chief doll designers. Leonard Wellings her brother was also an artist and well known for his plastering skills having his own premises in Wellington, Shropshire. When Norah left Chad Valley it was Leonard who suggested Norah rent a room in his building to make Cloth Dolls and Soft Toys. Norah moved into the premises in 1926 with only six women employees and called the small factory room The Victoria Toy Works. Norah Wellings began production and the catalogues and letterheads described the company as ‘Manufacturers of Soft Fabric Toys and Novelties’. Leonard was involved in the business and promotion side of the company as well as continuing with his own plastering firm.
Norah designed all of the dolls and soft toys herself. In 1927 she attended her first British Industry Toy Fair where her Products were shown for the first time with great success. The business grew very quickly and Leonard and Norah decided they needed larger premises and in 1929 bought a Baptist Chapel in King Street, Wellington, which was expanded and buildings added over the years. At the peak time during the 1930’s there were around 250 employees. Norah Wellings was also one of Britain’s leading doll exporters with over 70% of sales going overseas, this is why so many dolls are found world wide today. Many of the products were sold on board ship as holiday souvenirs.
Leonard Wellings died in 1959 at the age of 67 Norah had lost not only her brother but also her business partner and best friend. Norah decided it was time to retire and so on September 4th 1959 Employees were given two weeks notice and production ceased. Norah spent her retirement doing the things she enjoyed, painting, cooking and gardening, Norah Wellings died in 1975 at the age of 82.

Norah Wellings Sculpting a 'Babimine' Head with a 'Norene' Doll sitting and an 'Islander' just seen behind the 'Norene'. Photo taken in the 1930's